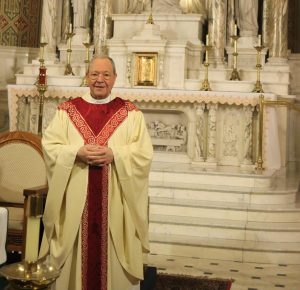 It is with great sadness to announce the death of Rev. Gregory R. Hite. Father Hite was called home to Christ late Thursday evening after a brief illness. He was 66.

Father Hite was the thirteenth pastor of St. Peter’s Catholic Church, serving in Mansfield from 2011 until this past June. Although he retired from the active ministry in July, he looked forward to continuing his priestly ministry as a ‘senior status’ priest.

No announcement has been made yet on funeral arrangements.

When he arrived at St. Peter’s in 2011, the parish was $1 million in debt to the Diocese of Toledo. He worked with parishioners to retire that debt and then focused efforts on restoring the 100-year-old church. The parish raised $2.5 million through the Preserving Our Past, Securing Our Future Capital Campaign to restore the interior of the 100-year-old church. The restoration work only began after there were enough funds to begin work. He was adamant that the restoration work did not require the parish to incur any new debt.

He also led a strategic plan to move the school system forward, and one of his last acts as pastor was to hire Mrs. Laurie McKeon as the first Head of School for St. Peter’s. Fr. Hite was committed to Catholic education of children because he knew the importance and benefit of forming the mind, heart, and soul of people.

“Father Hite was a very caring man. He had an appreciation and love for St. Peter’s and the Mansfield area, having served twice here,” said Fr. John Miller, current pastor of St. Peter’s Parish. “He was very dedicated to St. Peter’s Parish, in preserving our historic church, and forward-thinking to lay the groundwork to make the parish and school viable into the future. He had genuine care and concern for people. He would have felt very blessed and honored to do that through his priesthood.”

After his ordination in 1981, he served at St. Mary’s Catholic Church in Sandusky before pursuing graduate studies at the University of Dayton and the Catholic University of America in Washington, D.C. He returned to northwest Ohio and served as the associate pastor and high school principal of Fostoria St. Wendelin.

In 1994, he was named pastor of St. Mary of the Snows Parish in Mansfield and served in that role until 1999. Before returning to Mansfield, he served as President of Toledo Central Catholic High School and pastor at Saint Joan of Arc Catholic Church in Toledo.

Eternal rest grant unto him,
O Lord, and let perpetual light shine upon him.
May the souls of all the faithful departed,
through the mercy of God, rest in peace. Amen.