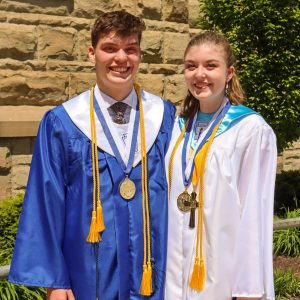 St. Peter’s High School announced Thursday afternoon that the Class of 2021 Valedictorian and Salutatorian come from the same family and share the same birthday. Cara Brubaker earned the top honor, followed by her brother Caden who earned Salutatorian.

Cara and Caden are the children of Chad and Christina Brubaker of Mansfield. Chad is a Captain for the Mansfield Police Department, and Christina is the principal of St. Mary of the Snows elementary school in Mansfield.

Both Cara and Caden are scholar student-athletes and active in the school’s Department of Theater and Performing Arts. The duo also earned several thousand dollars in scholarships. The siblings attended St. Mary of the Snows Catholic School before transferring to St. Peter’s High School.