Gasper made 59 saves in the match against Genoa Christian. 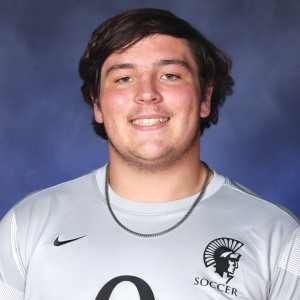 Being a goalie is no easy task, and for St. Peter’s senior Angelo Gasper, it’s been a busy season in front of the net. Last week, Gasper set a new OHSAA state record with 59 saves against Genoa Christian at Spartan Fields.

Gasper has been the starting goalie for the Spartans for all four years at St. Peter’s. In his final year for the Spartans, he is a leader on and off the field to a co-ed group of underclassmen.

His achievements in soccer include First and Second team honors for both the Mid-Buckeye Conference and All-District teams in his first three years at St. Peter’s. In addition to soccer, he is active in basketball and track (discus and shot put).

The previous record of 54 saves was set in 1996 by Tony Kremer of Monore High School in a match versus Centerville. Gasper said he was quite surprised when he learned the OHSAA record had been broken.

“At first, I didn’t believe it,” Gasper said. “I looked it up and saw I broke it; I was in a lot of disbelief.”

Todd Heichel is in his fourth year coaching the Spartans. He is impressed with Gasper’s passion and soccer IQ.

“He demonstrates a lot of passion in the net. Passionate is a great way to describe Angelo when playing soccer,” Heichel said. “He’s one of three seniors on a team full of ninth and tenth graders. He’s been an outstanding example of leadership both on and off the pitch. His high soccer IQ allows him to essentially be another coach during matches.”

Heichel went on to say Gasper also sets a high bar for his team at practices. 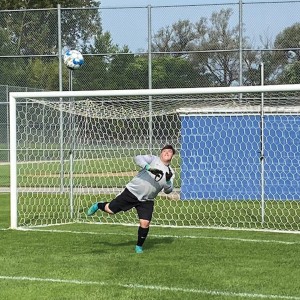 “In every drill, small-sided game, and scrimmage, he goes all out. Angelo demonstrates to others the importance of treating training sessions like a match.”

Heichel said the experience and leadership shown by Angelo has been invaluable to the younger and more inexperienced players. He takes time to show the younger players proper techniques and approaches to playing the game.

“He makes everyone around him better,” said Heichel.

“I feel like when I’m out on the field; I bring the competitiveness we need as a team. I help bring it out in them,” Gasper said. “It can be very difficult in goal as we have several young players who are still learning the game. They’re a great group of kids who give it their all. That’s all I can ask for.”

The Spartans are still searching for their first win, but not surprisingly, for a program that lost eight seniors last year. There is a real possibility that Gasper may make a run at the OHSAA single-season record of 424 for saves. After five games, he has a total of 181 saves. He missed part of his last match against Loudonville due to an injury.

Gasper hopes to continue to play soccer in college. He’s not had interest from colleges yet, but that may change as his dedication to protecting the goal continues.